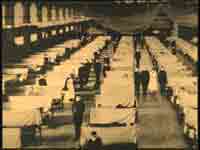 In 1918, the Spanish flu swept across the globe. The first victim died in the spring of 1918, then thousands more in the fall and winter. Soon, doctors all over the world were battling a highly contagious, lethal flu. It hit hard and fast. Schools and public places were closed. 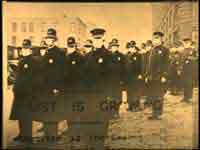 Many made vain attempts to protect themselves with gauze masks, but millions were still infected. The lungs of the sick filled with fluid, making breathing impossible. Victims died violently, spewing liquid from their nose and mouths, drenching their bed linens. When there were no coffins left, the dead were buried in mass graves. In a period of 18 months, between 20 and 40 million people died. And then the virus vanished, leaving behind only the fear that someday a similar outbreak could happen again. If there were a way to retrieve and study this killer it might explain why it was so deadly, and why it killed mainly healthy, young adults in their prime, unlike other flu viruses that kill the weak and elderly. 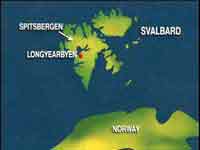 Dr. Charles Smith is the director of the world’s only pediatric forensic pathology unit, located at Toronto’s Hospital for Sick Children. In 1997, along with an international group of scientists, he traveled to the graveyard of Longyearbyen, a remote mining town on the Norwegian island of Spitsbergen, just north of the Arctic circle.

At Longyearbyen’s graveyard, simple white wooden crosses marked the graves of seven Norwegian miners. In the fall of 1918, these men were travelling from Norway by ship to work in the town’s coal mines. There was an outbreak of Spanish flu on the vessel, and they caught the deadly virus. Within days, their lungs turned to liquid. Lack of oxygen caused their skin to discolour and become black. The men died within days of each other soon after they reached land. The oldest of the victims was 28, the youngest only 19.

This Arctic island has been their final resting place for 80 years. The team hopes to use ground penetrating radar (GPR) to locate the burial site and retrieve the bodies of the seven miners from the permafrost, the layer of ground that remains frozen all year round. The scientists believe they will find the virus, still trapped in the frozen tissue of the dead. “Our hope was that the men were buried sufficiently deep that their bodies remained in the permafrost and hence their tissues, which would harbour the virus, would have remained frozen since the time they were placed there,” Smith explained. 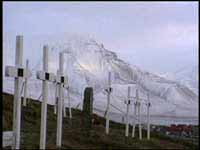 GPR is similar to sonar, which is used to map the bottom of lakes and oceans. It’s also quick, easy to use, and most importantly, doesn’t disturb the site. As it is dragged along the surface of the ground, GPR sends precisely-timed pulses of electromagnetic waves into the ground. The reflections or echoes are captured on a monitor and give a visual profile of the terrain. Originally, geologists used GPR to look at rock and mineral formations, but as the technology improved its use expanded. It has been used to uncover undetonated landmines all over the world, and was critical in locating a lost squadron of airplanes buried in the Greenland icecap since 1942. GPR pinpointed the craft hidden under more than 76 metres of ice and snow.

Smith has used GPR before in attempts to find buried bodies. “It doesn’t say what was buried. It simply says that something at this point has caused the ground to be disturbed,” he explains. “Whether it is a body or whether it is a natural gas pipeline, ground penetrating radar won’t tell you. It will simply tell you there was something there”

Keeping a watchful eye out for polar bears, the group began their work. “We worked in the cold for what seemed to be long hours from nine to 3:30 or four in the afternoon,” remembers Smith. Temperatures dipped to 6 degrees Celsius, and there were gusts of glacial wind and intermittent snowfall, but over four days scientists were able to map a 20 metre by 20 metre grid of the frozen rocky terrain.

The GPR gave Smith very encouraging news. “The data essentially said two things. Number one is that we believe bodies are buried sufficiently deep that they are in the permafrost. The second thing is that rather than discreet burial sites, it would appear that everything was buried in a single common grave, which would make sense because that is a common way of burying bodies when there is a mass disaster.”