In part as a reaction to the state Buddhism symbolized by Todaiji and the Nara Daibutu, a new regime moved the capital to Heiankyou(Kyoto)in 794.Largely coincidental with this move was the emergence into prominence of mikkyo”the secret teaching” a system of esoteric Buddhist belief and practice that was tobe articulated in the Shingon sect and the Tendai sect.

The Buddha Dainichi, a cosmic force that was already evident in Budduhist ideology by the time of the NARA Daibutu, became the organizing principle of esoteric Buddhism and the focus of worship.Esotericism also involved a vastly enhanced pantheon of deities, many culled from non-Buddhist tradition,and an increased emphasis on elaborate ritual as a means of harnessing the power inherent in this pantheon.

Perhaps the most characteristic art form of estoericism is the mandara, a schematic deption of the cosmos and its various gods that is used as the focus of meditation and ritual.Key to Shingon and Tendai practice were the paried mandalas of the Diamoind or Thunderbolt Realm(KONGOKAI) and the Matrix or WombRealm(TAIZOKAI), together referred to as the Ryobu mandala or “Tow Mandala”. An important early example of this format is the 9th century Takao mandala atJingonji. 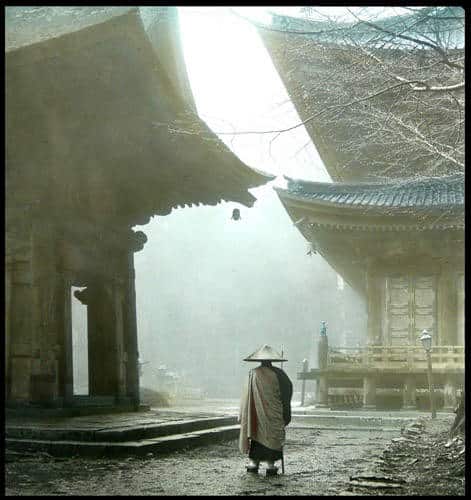 Unlike the metropolitan temples of the 8th century ,Shingon and Tendai temple as a whole constructed away from centers of urban concentration, usually in a mountain setting.For example , Enryakuji, seat of Tendai sect ,was built on the slopes of Mt.Hiei, and Kongobuji on Mt.Koya became the headquarters of Shingon sect.In both cases buildings were distributed in an irregular fashion over a hilly, forested terrain.

Tha paintings and sculpture that filled these buildings,in keeping with their function as iconic representations of esoteric deities, displayed an aesthetic and stylistic tenor appropriate to the mystery of ritual and meditation at a remote temple.An important example of this tendency is seen in the 9th century set of five statuses of the Bodhisattvas of the Void (Go Dai KokuzouBosatu),each in painted wood ,at Jingonji.Also coincidental with the development of esoteriscism was a trend in sculpture toward the carving of votive statues out of single blocks of wood, their surfaces left unadornrd with paint or lacquer in deference to the inherent sanctity of the sacred tree. The principal examples of this “pain wood” style are the Yakushi figures at Gangoji and at Jingonji.