Bddhist sculpture was introduced to from China and Korea, and from the 6th through the 8th century Japanese Buddhist sculpture closely followed continental prototypes.A more native style did not evolve until the 9th century.

Most early sculpture was rendered in gilt bronze or wood.Continental models provided the stylistic framework for much of the sculpture produced for Asuka period(593-710)temples. Important examples of early Buddhuist sculpture include the gilt-bronze (the Buddha Shaka flanked by two bodhisattva) in the main hall at the temple Horuji near Nara, dated 623 and attributed to the sculpture Tori Busshi ;the wood Guze Kannon in the Dream Hall(Yumedono)at Horyuji;and the wood statue of the bodhisattva miroku,probably a Korean work, at Koryuji in Kyoto. Animportant collection of early gilt-bronze statuary is the celebrated “48 Buddhas”group.

After the capital at heijokyo was built and occupied in 710 inaugurating theNara period(710-794) much sculpture was commissioned for the various temples being constructed in and around the new city.Although bronze remained an important medium, more works were rendered in clay(sozo) and in tow “dry”lacquer techniques(kanshitsuzo):hollow lacquer and wood-core lacquer. In addition to sculptures in the round, numerous relief plaques in clay(sembutsu) and in bronze repousse (oshidashibutsu)were used for iconic representations. 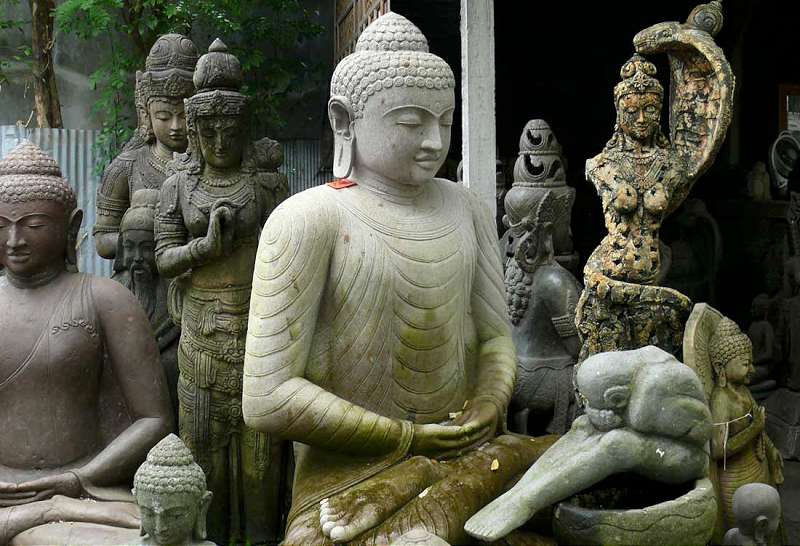 Important works of the 8th century preserved in the Nara region include the gilt-bronze Yakushi Triad and Sho Kannon at Yakushiji; the hollow- lacquer Rushana at Toshodaiji;and the hollow- lacquer portrait of the monk Ganjin,also at Toshodaiji.The construction of Todaiji initiated another wave of sculpture commissions. with a government-sponsored workshop, headed by the artist Kuninaka no muraji kimimaro, assigned to sculpture production.The principal Todaiji project was the development of the colossal gilt-bronze Rushana that became known as the Great Buddha of Nara (Nara daibutsu),a sculpture some 16 meters in height. As other halls were produced for them, largely in clay and in lacquer: Todaiji’s Hokkedo contains an important group of such 8th century sculptures, among them the guardian deity called Shikkongoshin.

By the end of the 8th century ,with the move of the capital from Nara to Heiankyo and the start of the Heian period (794-1185), wood had emerged as the favored medium for sculpture and was to remain so through the modern era. At first most sculptures were carved from one large block of wood ,in a technique called single- woodblock construction(ichiboku-zukuri),but by the 11th century, as demand for sculpture increased, joinery (joined-wood-block construction yosegi-zukuri) was the preferred and more efficient method.

The Heian period saw the emergence of Buddhist monk -sculptors,called busshi, and sculptor lineage as an artistic and economic force in Kyoto and Nara.Through the 10th century, most sculptors had remained in residence at major temples such as Enryakuji or Toji in Kyoto.However, starting with the 11th century artist Jocho, whose patrons were Fujiwara no michinaga and Fujiwara no yorimichi, sculptors became largely independent of temples,although an important lineage remained at kofukuji in Nara .

Important works of the early Heian period include the 9th century wood sculpture of Yakushi at Jingonji in Kyoto and the group of 9th century wood sculptures, arranged in the form of a mandala,in the kodo(lecture hall) at Toji.The Jingoji sculpture is also notable because it displays the interest in plain,unadorned wood shared by many sculptors in the esoteric Buddhist tradition.One of the most influential late-Heian works is the gilt-wood sculpture of the Buddha amida in the amidado, or Phoenix Hall,at Byodoin near Kyoto.Completed by works in 1053, it is one of the earliest extant works in the full-blown joinery method and established a technical honored through the 13th century.

The kei school ,a 12th century lineage of sculptors located at Kofukuji but closely associated with the Kyoto- based in and En schools, produced key artists, among them Unki and Kaikei, who would define sculpture in the Kmakura period (1158-1333).Wood remained the favored medium and joinery the technique, but, in contrast to the Heian tendency to gild statuary, Kamakura-period sculptors also showed much interest in paint as a finish for sculptures.Kaikei’s 13th century figure of the bodhisattva Jizo ,originally at Todaiji, is an example of this tendency. In addition, the eyes of the sculpture have been inlaid with crystal in the “jeweleyes”(gyokugan)technique,which was developed late in the 12th century and became a standard feature in the increasingly”realistic”forms of the Kamakura-period sculpture.
Sculpture after the Kamakura period tended to become increasingly standardized,with sculptors producing works largely limited to conventional modes based on the Jocho or Unkei-Kaikei models. Tow celebrated exception were the Edo-period (1600-1868) artists Mojiki-Gogyo and Enku.