Babies spend at least their first two years in diapers, and at least a few days or weeks of those years suffering from diaper rash – red, irritated, broken-down skin. But there are things you can do to help your baby avoid diaper rash and to heal it when it does occur.

Rash in the diaper area is commonly caused by irritation from stool and urine, especially when these are in contact with the baby’s skin for several hours, such as during a nap or overnight. Fecal bacteria may produce ammonia or acids that break down the skin and predispose it to further damage.

Diaper rash can also be caused by skin bacteria such as Staph aureus, or by candida, a common yeast on the skin. Some babies develop eczema (allergic dermatitis) in the diaper area. For some, a diaper rash is actually seborrhea or psoriasis. Your baby’s doctor can diagnose these and other uncommon diaper rashes and prescribe the best treatment for your baby.

The best way to prevent diaper rash is to change the diapers frequently and to keep baby’s bottom clean and dry – but healthy and soft, too. The diaper should be changed as soon as possible after a bowel movement, and about every two to three hours throughout the day.

Should your baby be in cloth or disposable diapers? Ah, there’s a good question, and one full of controversy! There’s no question that disposable diapers are convenient. And they have been embraced by day care centers and hospitals as a way to minimize the spread of stool viruses and bacteria that cause diarrheal illness – but the best way to reduce the spread of illness is for diaper-changers to wash their hands!

Disposable diaper manufacturers claim that their diapers are able to absorb liquids better and so keep bottoms drier. But because of the absorbency, it may be hard to tell when the diaper is wet, and so disposable diapers may not be changed as often as needed.

Which is more economical, cloth or disposable? A year’s worth of disposable diapers (assuming an average use of about eight to 10 diapers a day) will cost about $1,000 vs. three to four dozen cloth diapers at an initial investment of less than $50. Yes, cloth diapers need to be laundered several times a week, for a cost of about $2 per laundry load. But with the money saved by using cloth diapers, a family can buy a washer and drier for the entire family’s laundry – or can take a great family vacation if you already have a washer and drier! The next one or two babies in the family can use the same cloth diapers, and later you can use the diapers for washing the car or mopping the floor. And you won’t contribute to environmental waste in our landfills.

A load of cloth diapers should be washed with regular laundry detergent and chlorine bleach (a cup per full load) in very hot water, rinsed twice, and then (ideally) dried in the drier or hung outdoors in the sun. Clean diapers should be so white and fresh that you could use them as a handkerchief or a placemat on your table — they should never have an ammonia odor or other stain. 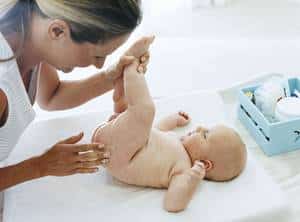 You can both prevent and heal irritative (stool and urine) diaper rash in the same way: Change the diaper frequently and keep stool off the skin. If the diaper contains only urine, the baby’s skin needs no cleansing. But if the baby has had a bowel movement, the bottom should be cleansed with mild soap and water. If you are at home, you can gently wash the baby’s diaper area at the sink, soaping up your hand or a very soft cloth with a mild soap, and then rinsing the skin well with running water and drying it with tissues or a soft towel. The commercial “baby wipes” are expensive and unnecessary, and will sting already irritated skin. If you are taking the baby out, you can carry along a wet washcloth or tissues in a plastic bag.

If a diaper rash develops even though you are cleaning the area well, you can apply a barrier cream or ointment to the clean diaper area to keep the urine and stool away from the skin. Some good examples are Desitin, zinc oxide, A and D ointment, Bag Balm, and good old petroleum jelly. Reapply the cream or ointment at each diaper change after you’ve washed away the stool.

A yeast rash is fiery red and extensive, covering many inches around the genital area. Your baby may cry in pain when he urinates or when you cleanse the area, especially if you use wipes. Yeasts like warm, wet, dark places – what could be better than a wet diaper? You can help avoid yeast diaper rashes by exposing the diaper area to light and to air whenever practical.

If your doctor diagnoses a yeast diaper rash, she may recommend a cream such as clotrimazole, ketoconazole, nystatin or others, to be applied several times a day along with careful frequent diaper changes and exposure to air. Never put a steroid cream (cortisone and other products) on your baby’s bottom unless your doctor has specifically recommended it.

Pediatricians should evaluate difficult or recurring diaper rashes, but parents can take steps to keep baby’s bottom as rash-free as possible.

Should my wife stop taking Anaspaz (hyoscyamine sulfate), an anti-cramping medication, if she’s breast-feeding? A doctor told us that the drug may affect her breast…

At what age can my child start drinking whole milk? The ideal source of nutrition for healthy infants is human milk. Iron-fortified commercial infant formulas,…

My daughter had been playing a hard game of softball, so she kept drinking Gatorade to keep herself hydrated. Next thing, you know, though, she’s…

“My baby son is almost 20 months old. Since he was about 8-months-old my baby’s bad breath has smelled sour. He had a lung infection twice…