Jan Yager, Ph.D., a sociologist recognized as an expert on friendship and author of the book When Friendship Hurts (Fireside/Simon & Schuster; www.whenfriendshiphurts.com), defines negative friends as those “who do not bring out the best in you or make you feel good about who you are.” More specifically, according to psychologist Lillian Glass, Ph.D., author of Toxic People, anyone who manages “to drag you down, make you feel angry, worn out, deflated, belittled, or confused” gets the toxic label and is someone you don’t need in your life.

On top of the old clean-out-the-chaotic-closet ritual, think about setting your sights on a different sort of spring-cleaning goal in the coming months. It involves a process that takes much courage and determination, but the payoff reads like a miracle cure: restore your energy, free up your time, and bring more balance into your life. How? By making the decision to break up with “toxic friends”—those people in our lives who take way too much from us and offer way too little.

Let’s be clear here. Friends will occasionally let us down. They may break a promise, blow us off, or hurt us in another way. But with true friends, we can clear up matters by voicing our disappointment and requesting different behavior. These are not toxic friends. And sorry, neither are those folks whom we’d just as soon not have in our lives because making time for them feels stressful. “Toxic” applies to those so-called friends who are consistently self-absorbed, cruel, needy, or disloyal—or all of the above—and who refuse or are unable to change their behavior.

Extensive research has been done on the positive effects of friendships, including the physical benefits, which range from being less susceptible to catching a cold to increasing one’s life span. But psychologists and sociologists have only recently begun examining the negative effects of toxic friendships. According to Beverley Fehr, Ph.D., professor of psychology at the University of Winnipeg and author of Friendship Processes, a book that examines how friendships give meaning to our lives, this type of research is in its infancy, measured so far mainly by surveys and interviews. Still, initial studies are revealing. 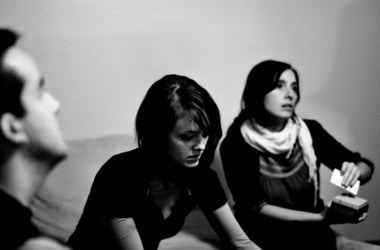 In a Ohio State University survey, 206 undergraduates answered questions about stress in their lives. Researchers then measured how various daily and life stresses impacted their health and discovered that “negative social interactions” with friends, like being taken advantage of and being betrayed, weighed more significantly on their overall mental and physical health than did the positive presence of supportive friends. What’s important to understand, Yager underscores, is that if a friendship is causing “undue stress,” then “the healthy response is to step back and assess the situation.”

Barbara Lewis, 58, an attorney from New York, befriended a drama queen who “constantly needed tons of attention, especially in public places. Just one example: My husband and I went out to dinner with her and her out-of-town friends at an expensive restaurant. Within minutes, she announced, ‘I’m very sick and have to leave!’ Then she left us there to entertain her friends, whom we’d never met. She never even called the next day or thanked us.”

Lisa Frattini, 33, a freelance consultant in Boston, dealt with a different but equally common toxic-friend issue: “I had a friend who was always there for me in times of need but couldn’t handle hearing about it when my life was going well. Worse, she’d make up reasons to be mad at me—when I told her about getting a new job, for example—that made absolutely no sense.”

Both women admit to letting their resentment, and the relationship, go on too long—typical behavior. According to Fehr, “our most common reaction to difficulties in friendships is to avoid discussing problematic issues and to let them fester.” The reason: a fear of being hurtful, especially for women—even if we’ve been wronged. It makes it all the trickier when the friends are charismatic or otherwise attractive, or if we know we’ll have to see them regularly in the office or in our circle of friends. So we overlook their harsh qualities and hope that if we’re “busy” every time they call, the friendship will eventually trail off entirely. More often than not this passive-aggressive strategy just reduces—but doesn’t eliminate—your contact with that person. The relationship remains hanging out there to pop back into your life, deepening your resentment even further each time.

In the same way that it’s important to monitor our physical health by keeping tabs on our diet, exercise, and sleep patterns, it’s equally important to protect ourselves by changing or cutting off negative friendships. While the process of ending a relationship may seem daunting, there are ways to make it easier.

As a starting point, Glass recommends simply listing those people and their specific behaviors that consistently get under your skin. Evaluate whether your relationship is worth trying to save by asking yourself whether the friendship is one you’d like to keep if he or she were to change the behaviors. If the answer is “yes” or even “maybe,” it is probably in both your interests to have a conversation that pinpoints what he or she can do—targeting the specific behavior—to change. Avoid phrases like “Don’t be such a liar” or “Just show you care.” Instead try “I need to know that if you make a promise to me, you’ll stick to it” or “I appreciate your support when the chips are down, but I need you to be supportive in the good times as well.” Your friend will either value your friendship enough to change this behavior, or he/she won’t—which will validate that you are better off without that person in your life.

If you’ve already tried unsuccessfully to fix the relationship and have decided you want out, it’s important to think about exactly what you want to say to your friend. Barbara Pachter, corporate trainer and author of The Power of Positive Confrontation, suggests writing it down beforehand and practicing it aloud. The goal is to be as clear and nonaccusatory as possible to limit the chance of getting sidetracked by irrelevant comments. You may want to start the conversation, Pachter suggests, by saying, “I’ve asked you to change this specific behavior a number of times and at this point it’s incredibly frustrating to me.” Do not insult or attack your friend (which may feel great temporarily, but will later leave you feeling petty) but rather offer a simple explanation of what went wrong and why you want to shelve the relationship. Be firm but calm.

Very few people are strong enough to hear a rejection from a friend, process it on the spot, and respond calmly. Remember that you, unlike your friend, have had the relative luxury of pondering the issue and how you want to present it. You can, in fact, bet on him or her going on the defensive, telling you what you’ve done wrong as a friend or why you are wrong in your judgment.

Pachter suggests defusing the situation by acknowledging what was said before moving on (for instance, “That may be true, but . . .” or “In spite of what you’ve just said . . .”) and then repeating your bottom line: “This friendship is not going to work for me.” This can be excruciating but is absolutely necessary if you want to prevent the relationship from dragging on. Then wish the person well and leave. Do not stand there if he or she verbally attacks you, which will only create the opportunity for both of you to say things you’ll regret.

If, on the other hand, you feel your friend responded with a valid point, perhaps one you hadn’t considered, don’t feel locked into ending the relationship. You have a right to change your mind or decide that you do still want to part ways. Acknowledge that you’ve heard what he or she said and offer to think it over. If possible, give the person a precise time when you’ll respond—tomorrow or next Monday, for instance. It will prevent your friend from worrying about when and whether you’ll be in touch and help you remain committed to your course.

You will likely feel a sense of relief once the “breakup” is over. But don’t be surprised if you also feel guilty, sad, or stressed; you’ve invested in a relationship with this person. No matter how angry you are, you don’t want him or her to feel hurt. Talk to close friends who will help you validate your decision, but don’t bad-mouth your former friend. You’ll feel better in the long run if your breakup is as gracious and mature as possible.

Let yourself feel grief over the end of the relationship. But you can also feel proud for doing something extremely difficult and know that you’re better equipped to recognize toxic-friend warning signs. Congratulations. You now have more time to spend with quality friends who both take and give while energizing and bettering your life.