On the inside is a good place to be as the weather cools and skies turn gray. Specifically, on the inside at the National Arboretum where a huge display of some of the most fascinating flowers in the world are on show (free) now through November 16, 9 am to 4:30 pm, seven days a week.

I recently attended the opening of this remarkable exhibit celebrating the National Arboretum’s 70th birthday. Called Floral Blossoming Wealth of South Africa, it is located in the main hall of the visitor reception center at the Arboretum, 3501 New York Avenue Northeast, in Washington. It features fresh and dried floral plants from South Africa, and is sponsored by the USDA Agricultural Research Service, and by the South African Agricultural Research Council.

The new hybrids represent the first fruits of an expanded South African floral industry, achieved with the encouragement of the USDA. These flowers are unlike anything we’re accustomed to from this hemisphere or from Europe or Japan. The most striking flowers belong to the protea group. The group is named for Proteus, the ancient sea god of the early Greek culture, who could change into many forms. Shrub-sized in the wild, they are usually taller than the surrounding vegetation and sometimes form small trees. The remarkable, brightly-colored flower head is actually a collection of many flowers within a deep cup formed by bracts, or overlapping scales. 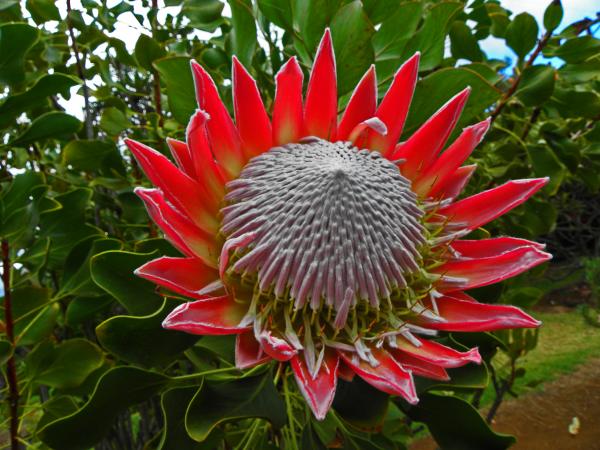 The flowers themselves consist of three petals joined together and a free petal—Your florist probably carries the red pincushion protea which to me looks like a sphere of orange fireworks exploding at the top of a stem of succulent leaves. Dramatic as that sounds, it’s far from the most dramatic of the protea. That honor is reserved for the King protea, Protea cynaroides, which is the national flower of South Africa, a huge blossom 8 inches across. It looks like a cross between an artichoke, a sunflower, and a waterlily. The flower part is a fuzzy flattened pale pink ball surrounded by what look like the pointed dark pink or red petals of a wide-open waterlily. The “petals” are stiffish bracts. Centering the many huge beautiful floral arrangements in the show, the King proteas are simply spectacular.

There are dozens more amazing flowers on view. Some are smaller relatives of the Kong protea—some elongated, some like huge daisies, some small and fuzzy. Looking at them, it’s on the tip of your tongue to say what they resemble, but they don’t actually resemble anything else. Others are more familiar florists flowers, that I, for one, didn’t associate with South Africa — the flower we call Bird of Paradise, which I believed native to Hawaii, apparently is one of South Africa’s contributions to the floral industry. There are some lovely heathlike shrubs, some fascinating reedlike plants touted as substitutes for ornamental grasses, and some lovely new flowering bulbs, including a beautiful new creamy white Star of Bethlehem Ornithogalem named ‘Tipper.’

Research cooperation between the Agricultural Research Service and its South African counterpart had its beginnings in 1994. It encourages exchanges of scientists, and coordinated research projects many of which are intended to help small-scale farmers to develop the culture of these extraordinarily decorative native plants. Other projects that will be of interest involve developing new environmentally friendly pesticides for agriculture.