Bioregionalism is a movement that reorganizes populations on natural and definable boundaries, in contrast to the artificial boundaries created by state and county lines. In a sustainable design, bioregion helps define the term local for the population. Bioregional stability can be measured by the reduction of imports and exports into the area, and the wealth can be measured by the increase in the biological resources, e.g. increase plant and animal diversity, and the development of community gardens and urban forests. (Morrow, 1993)

If Sunset Western Gardening Book helps gardeners understand their general bioregion by creating climate zones, the bioregional movement helps all of us understand what our backyard is.

In the Bay Area, there has been a redefinition of our place as the Shasta Bioregion, and it is defined by the watershed that is created by the Southern slope of Mount Shasta and runs to the sourthern end of the San Joaquin valley to the south. Our water, air, soil, and biology are linked by geography, and what affects any of these elements in the bioregion will eventually affect us. Planet Drum in San Francisco is a local organization that has worked hard to develop the notion of bioregion for those of us living in the Bay Area and the Shasta Bioregion. When stories appear about this bioregion, one might now begin to see it as ones own backyard. Bioregionalism is the great argument against the myopic NIMBY complex that has been the lazy rationalization of many despairing and apathetic people today. If the definition of Backyard is broadened, will the participation of the people who share it also increase? In other words, will an oil spill in the San Francisco Bay become a concern for those who live in the mountains? Enlarging the view of your home and your backyard by defining your bioregion and how it affects you in your life is part of an extended permaculture perspective. Having the strategies to affect that bioregion is another.

I have heard the argument that the human race will soon enough find a technological solution to today’s global environmental problems, so why be so concerned? This techno-centric argument that is fearful and disdainful of the progressive attitudes I find are prevalent in the Permaculture approach to design in the 21st century. Perhaps, I respond. And perhaps a solution has crept into our technological world disguised as Permaculture. I believe the burgeoning industry called bioremediation can be claimed as a Permaculture strategy for cleaning up the land, though it is exalted as a new technology claimed by the the industrial sector. 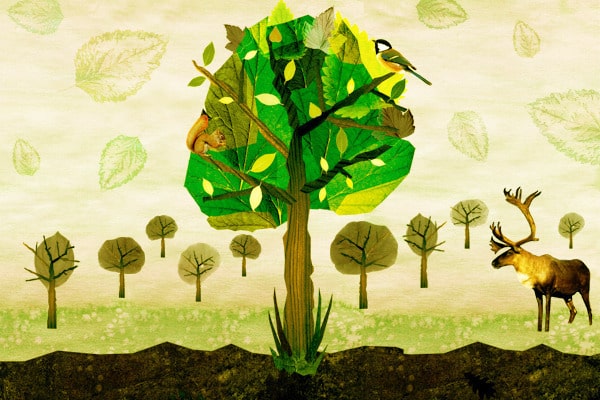 What is bioremediation? The darling of remediation business, it is a strategy of cleaning up polluted land and water and air using biological, organic resources. Claimed by the industrial sector and environmental scientists as a new method of cleaning up hazardous waste, bioremediation projects are subject to regulation by the EPA, OSHA, the Army Corps of Engineers, the county, etc. But bio means life and remediation comes from remedial meaning intended as a remedy. And as the natural medicine revolution is teaching us, remedies can come from many sources.

Today we can see many examples of bioremediation which have very exciting results. John Todd’s Living Machines are an excellent example of bioremediation strategies on a compact scale, where raw sewage and effluent from building plants can be treated through a system of artificial ponds deliberately and carefully filled with plant life. Wetlands, ponds, lagoons and pits are larger scale bioremediation systems. Industrial, technological bioremediation uses introduced microbes which are capable of using the contaminant as the sole carbon and energy source to isolate pollutants such asbestos, surfactants, petroleum hydrocarbons, creosote, ketones, phenols, PCB, solvents, and pesticides that are discharged in the soil or soil. This is just a general list of some of the more charming poisons we have created that now need to be cleaned up. . Science and technology may undermine itself by supporting this developing body of knowledge and reaffirming the value of natural biology as a solution.

Using bioremediation to heal a polluted and diseased bioregion, Permaculture is an awesome strategy for taking care of our own backyard. A permaculturist is concerned with the health and stability of a system, and practices permaculture because the general abuse of our environment has led to a disintegration of many ecological systems. This disintegration has had dire consequences for the diversity of species, the cleanliness of air and water, the fertility of soil, and the general health of humanity and life forms altogether.

Permaculture can be considered another bioremediation technique. It restores the ecology of a system by designing in natural elements like microrryzal fungi and organic material to recreate complete soil, trees to remove CO2 depletion and generate oxygen, plants for human health and plants for habitats. Where the land has been degraded ruined by overgrazing, deforestation, dams, invasion of exotics, degradation of habitat, destruction of water quality, ad nauseum, permaculture addresses these sorry conditions with an integrated design, not an isolated mechanism for rectifying one condition.

Many of the permaculture strategies are based on reducing the impact on the land by reducing the need for extractive technologies and transportation. The axiom of Permaculture that the problem is the solution reveals the willingness of designers to work with what they have, not with what they can buy, extract, import, manufacture, or throw away. Our strategies will be low-impact and low-tech so that more problems are not created in the effort to solve one. A permaculture remediation project is as sophisticated as any environmental scientist’s solution, but the original source of knowledge deeply affects the process and the outcome.

There is a definite place is our excessively polluted world for technologies which can extract pollutants such as radioactive isotopes, PCB’s, pesticides, and the like. But bioremediation does not remain the domain of ecological technology any more than your body’s health is administrated to by the modern medical system. Where natural systems prevail, natural designers must administrate. It’s only natural.

If you want to save seed from your peppers to grow next year the following will guide you through the process. Seed Saving tips For…