El Nino is a warming in the Pacific Ocean that can affect weather half a world away.

So far, predicting El Ninos has meant looking for subtle changes in sea surface temperatures and wind currents. But these changes signal that an El Nino has already begun. For example, last July, experts at the U.S. National Weather Service announced that a mild El Nino was already under way and would likely continue into this year.

But Scott Curtis — of the Joint Center for Earth Systems Technology in Maryland — says he predicted the summertime onset of El Nino last February.

Scott Curtis: We’re trying to find the very first signals of El Nino development, which appear to be in the Indian Ocean prior to the signals in the Western Pacific Ocean.

Scott Curtis: But physically what’s going on here is we have these storm systems of precipitation and wind that move from the central Indian Ocean, past Sumatra, and then north of Australia and then into the Western Pacific.

Curtis noticed that when this pattern repeated several times in a few months, an El Nino usually followed six to nine months later. This work may help illuminate another piece of the puzzle that is El Nino.

Curtis was careful to note that when he predicted the current El Nino in February of 2002, he wasn’t alone. “In consideration of my colleagues at the National Weather Service, who would take issue that they were “out-forecasted” (in fact the Climate Prediction Center announced that conditions were ripe for an El Nino to develop over February-March-April), I would suggest the following change in the first JB script: FROM ‘Curtis says he predicted the El Nino several months earlier’ TO ‘Curtis says he predicted the summertime onset of El Nino in February’. Thank you for making this change and preventing any misunderstanding.” 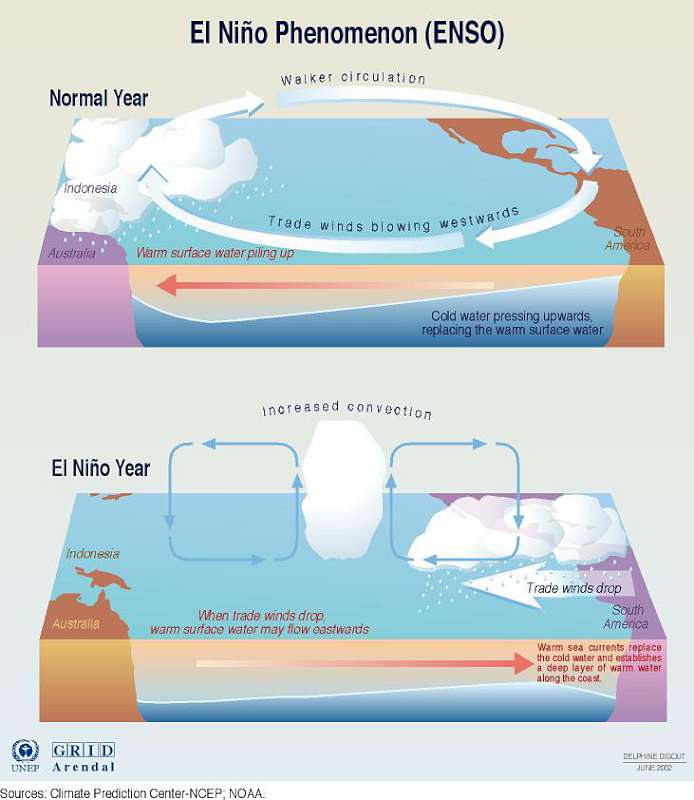 The El Nino/ Southern Oscillation is officially marked by above-average sea-surface temperatures in the central and eastern Pacific Ocean. Because pronounced weather affects accompany El Ninos, forecasters are eager to predict them as far in advance as they can. But this becomes a dodgy game of monitoring sea currents and temperatures to try to detect subtle trends.

In July of last year, experts at the U.S. National Weather Service (N.W.S.) announced that a mild El Nino was already under way. Hints that an El Nino was coming began several months before, but predicting El Ninos is still as much art as it is science. By late 2002, the effects of El Nino were becoming obvious. For example, the 2002 atlantic hurricane season was very weak. In November 2002, the National Weather Service announced this was a result of El Nino.

In the same month, the N.W.S. predicted that the current El Nino would bring “increased storminess and above-normal precipitation to the southern United States [in late 2002 and early 2003] . . .” The N.W.S. also predicted “more moderate temperatures and reduced storminess across the northern states this winter; warmer and drier-than-average conditions in the northern Rockies and Ohio Valley states; and, the possibility of increased stormy weather along the East Coast.”

“It seems that just looking at the Pacific you miss a piece of the puzzle,” says Scott Curtis, a researcher at NASA’s Goddard Spaceflight Center in Greenbelt, Maryland. “You really need to go to the Indian Ocean to see where these systems begin and track them as they go from the Indian ocean to the western Pacific.”

During the past few years, Curtis has been analyzing satellite data to better understand weather patterns in the Indian Ocean, and has noticed an apparent connection with El Nino events. While analyzing satellite data of weather in the Indian Ocean, Curtis noticed a relationship between certain storm patterns in the region and El Nino events. The defining signature of storms that seem related to El Nino events is that they cause rainfall in the central Indian Ocean while out on the ocean’s eastern flank, the coasts of the Indonesian island of Sumatra are dry. About two weeks later, as the large storm moves east, rain falls on Sumatra while the atmosphere above the central Indian Ocean is dry. When this rainfall pattern begins to repeat every 30 to 60 days — that is, when such big storms begin following each other eastward monthly, each on the heels of the other — an El Nino event is about half a year behind.

This pattern preceeded the five strongest El Nino events from 1979 to 2001, Curtis said. Then in early 2002, Curtis and his colleagues detected the pattern again, which then repeated five times during the next six months. On the basis of the first repetition, Curtis’ team predicted an El Nino event would develop sometime in late 2002, with its weather affects to be felt most strongly during the northern hemisphere’s 2002-2003 winter.

The El Nino/Southern Oscillation is a very complex process, and it is not clear whether ocean or atmosphere plays the strongest role in initiating the affect. Curtis, however, believes the strong warm-weather storm systems moving from the Indian Ocean toward the Pacific may help trigger El Nino events, through he cautions that is still speculation at this time.

“Once these systems get to the west Pacific, the strong winds that accompany these systems have the affect of stirring the the ocean surface, creating waves of warm water that move to the east Pacific, and helping to generate an El Nino event,” Curtis said.