The wild Sumatran tiger is found only on the Indonesian island of Sumatra. And it’s estimated that there’s just 500 of these tigers left. Today — a Young Producers contest winner tells you more

Amelia Watts: In the Riau Province of Sumatra, a 243-pound tiger was relocated to a private safari park after it was believed to have killed 5 people. Most of the forests in Sumatra have been converted into palm oil plantations, cutting down most of the tiger’s natural habitat. They prey on small and large mammals, but are starting to feed on humans. The Sumatran tiger is the smallest tiger. Their range is limited to an area in the mountainous southwest of Sumatra, an island that is part of the Indonesian chain. Females average as long as 7.2 feet, males 8.9 feet long. Yikes! Pam Noel is the assistant curator of the Asian Domain at the Lowry Park Zoo. She says the tiger is unusually strong for its size. 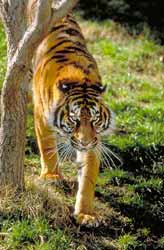 And when you’re in the building on a feed night, it’s pretty intense, just how powerful and magnificent, I guess, that they are, when you can see them move around and tear apart logs you wouldn’t even dream of lifting.

Amelia Watts: In the Lowry Park Breeding group, the main female is named Enshalha. One of her mates is Binjai. I am the adopted zoo parent of Binjai . . . Oh, boy!