An Extraordinary Archaeological Find:
A Decorated Paleolithic Cave
in the Ardèche Region of France

Animals in the Chauvet Cave

On 17 January 1995, the Minister of Culture and Francophony, Jacques Toubon, announced the exceptional archaeological discovery of a decorated cave.

It incorporates several very large galleries that accommodate more than 400 paintings and engravings dating to the Paleolithic era (between 32,000 and 30,000 years ago). These works depict a unique and diverse menagerie among which rhinoceroses, felines, bears, owls, and mammoths. The discovery was made in December of 1994 at Vallon-Pont-d’Arc in the Ardèche region of France.

The cavern has also preserved numerous traces of human activity, among them hearths, flintstones, and footprints. The cave is completely undamaged and untroubled by previous visitations, which makes it an outstanding research object for archaeologists. The discovery was made by Mr. Jean-Marie Chauvet, Mrs. Eliette Brunel-Deschamps and Mr. Christian Hillaire who had been doing speleological surveys in the area for numerous years.

In view of the national and international artistic and archaeological attention that was generated by this find, it was classified a historical monument.

The study – progress of the scientific research

Map of the cave 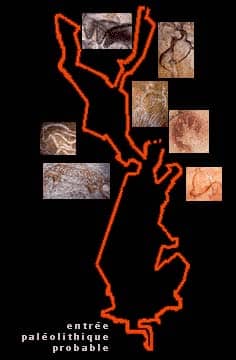