This book by one of the best known and liked authors and educators in western herbalism today is a cornucopia of information that every herbalist as well as interested lay persons should have on their shelf. However, it is more than a mere compilation of sources. David Hoffmann has a progressive outlook, and justifies his book to the reader on several grounds.

Hoffmann argues that the unprecedented increase in information , fuelled by advances in computerisation and the global accessibility afforded by on line communications, is itself a radical and active force transforming the traditional patterns and culture of healthcare. The relationship between an “expert” physician and their patient is being replaced by a “colloborative” paradigm in which practitioners are enlisted by clients to assist them in defining their own path from among the many possibilities, towards their individual medical or health goal. It is the awareness of these choices and options amongst the population at large that has been faciltated by the information revolution. 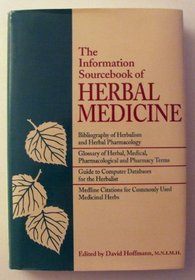 Hoffmann points out that those drawn to herbalism often get their information from the selective marketing and promotional material of herbal product companies and emphasises the need for people in the United States to be aware of the huge variety and importance of native american medicinal plants. He argues that the FDA and the pharmaceutical industry effectively prevent people from making knowledgeable and informed decisions , and that both those who wish to self-medicate with herbs, as well as their “legal guardians” must inform themselves about the facts and issues involved.

As justifications for producing the book, these arguments may be debated by some. Personally, I would need no justification for buying this book other than its comprehensive and detailed coverage of sources of phytotheraputic information, together with practical advice on how they can best be utilised. Turning now to the main contents of the book – there are four sections.

The bibliographic sources listed are comprehensive, and range from handy sources of out-of-print books on herbalism through to FDA publications. Some treasures are included – like the little known Lloyd Library in Cincinnati – which is the finest collection of its kind in the world. There are ommissions – particularly in Asian and Oriental herbal systems, but Hoffmann himself notes quite reasonably that as a herbalist trained in western phytothery, he is not qualified to attempt an in depth coverage of sources for Chinese or Ayervedic herbal information.

A major section of the book is devoted to ” On-Line resources”. Here, Hoffmann has been more selective, focussing a large section of the book on the National Library of Medicine’s MEDLINE database. He illustrates clearly how to use PaperChase – a commercial third party interface for MEDLINE – for interactive searching of the huge database. He includes a glossary of MeSH terms and there are useful tips for PaperChase users such as his suggestion of creating “custom list” that includes all MEDLINE’s generic references to medicinal herbs in a Boolean algorithm (SUM Plants, Extracts + Plants,medicinal + Medicine, herbal + Drugs, Chinese Herbal) to ensure all possible sources are searched). It should have beenmade clear however that for individual subcribers, especially in the USA, PaperChase, although convenient, is not the cheapest means of accessing MEDLINE which can now be accessed from several web sites free of charge – a relevant consideration for herbalists and others not enjoying institutional subsidies for their research. Hoffmann also includes 60 pages of MEDLINE citations on various individual plant Genera, and this alone repays the cost of the book !

Hoffmann includes brief reference to NAPRALERT, Professor Farnsworth’s invaluable database, and perhaps could have included more information on using this resource. A major omission from his discussion of on-line resources is the absence of any listing of Internet resources. This would of course have been difficult given the production schedules of the book publishing industry, since Internet resources are notoriously volatile, but the fact is that the Internet is now a major on line resource for the medical community, and there is a real need for a guide to these resources oriented toward herbalists. Several recent articles in herbal journals have covered this area – Hoffmann is undoubtedly correct in emphasising the importance of electronic resopurces for herbalists, traditionally a dispersed community.

Finally the book contains a useful glossary of herbal medical and pharmacological terms. As with any plant list, there are necessarily omissions and inconsistencies. For example in his listing of herbs by Latin and English names Hoffmann omits several plants that are specific to the regional floras of the United States, despite his arguing for a re-evaluation of these important botanicals. For example, the Ginseng related Opoplanax horridum – Devils Club, and many interesting species of the North and South West floras are absent altogether. In other cases he gives the official European species eg Valeriana officianalis, rather than listing any of the native American species. It is perhaps a pity that Hoffmann, an British ex-patriot, did not include more specifically European sources in general in the book. This nonetheless does not detract from its usefulness to herbalists everywhere – a welcome and useful publication.