Why does a lightning bolt — to our eyes — appear to move from a cloud to the ground when actually it goes from the ground up?

Lightning isn’t as simple as it looks. The lightning bolts you might see usually involve a whole process of electrical exchange — between clouds and the Earth. During the first stage of the lightning process — known as the “stepped leader” — electrons are broken off from molecules. This makes a conducting channel — and it almost always begins in the cloud and travels downward.

But this first stream of lightning that goes from the clouds to the ground isn’t what you see. When the “stepped leader” reaches the ground, a bright return stroke races up the previously-formed channel faster than you can see. So you should see a lightning bolt as a flash — a bright line with no motion. And yet, people almost always claim to see lightning travel from the clouds down to Earth. 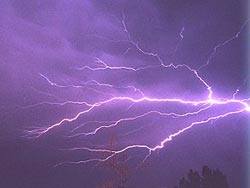 Scientists aren’t really sure why this is. Psychologists think that any time we see a line appear next to a point that we’ve already focused on — say, a cloud — our brains interpret it as a line growing out of that point. Maybe that’s how our minds process the sight of lightning.

If you enjoyed this article, the following books and article may be of further interest to you:

You can think of a thundercloud as an electric battery. Like a battery, the storm cloud is electrically split in half, with a positive electrical charge in the cloud tops — and a negative charge massed at the bottom, or vice versa. Scientists believe this happens because falling hail collides with ice crystals in the cloud. These collisions strip electrons away from atoms and carry them downward.

The channel — called a “stepped leader” — acts like an electric wire. Now positive charges from the ground rush up that channel in an extremely intense current called the Return Stroke. Since it moves at a third of the speed of light, we can’t see the direction of movement. We see a lightning bolt all at once.

At 50,000 degrees F, lightning’s return stroke is five times hotter than the surface of the sun. The dramatic difference in temperatures between the flash and the cloud creates the shockwave that we hear as thunder.

“Conductivity decreases when humidity increases. Considering the earth as a whole, lightning is very common, occurring with a frequency of about 100 lightning events per second. Scores, hundreds, and even thousands of lightning events may occur in connection with a given thunderstorm.” (Van Nostrand’s Scientific Encyclopedia, 8th ed., 1995, p. 1883)