Skip to content
North Americans typically regard the West Coast as a geologically hazardous area because it’s situated where two tectonic plates meet – on the San Andreas Fault. But recent studies have shown the East Coast could be geologically volatile as well. In this week’s Science, geologists from Penn State University say pressurized water trapped deep within the continental shelf in the Atlantic Ocean has the potential to trigger a tidal wave.

The geologists, Dr. Peter Flemings and graduate student Brandon Dugan, examined an area about 160 kilometres off the coast of New Jersey, where the continental shelf of North America begins to slope downward in the deeper parts of the Atlantic. Over 600 metres into the slope, they found “soggy” rock that is mostly composed of water.

The good news is the geologists don’t know if the pressurized water would be expelled fast enough to create a tidal wave.

“It could seep out more slowly rather than catastrophically,” Flemings says. “We lean toward the slow interpretation.”

This study of the continental shelf of the East Coast comes on the heels of another study that exn.ca reported last May. In that study, geologists found cracks in the continental shelf off the coast of Virginia. Those cracks could also cause landslides and, subsequently, tidal waves. Both studies show that tidal waves can be caused by underwater disturbances other than earthquakes.

Flemings gathered his data with other researchers during an expedition in 1997. They were studying the history of sea level and climate change by examining the layers of sediment in the continental slope. When they drilled into the slope and removed a core sample, they found the watery rock. 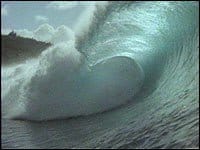 Back at the lab, Flemings and Dugan entered the data into a computer simulation. The simulation showed just what they didn’t want to see – that the pressurized water in the lower layers of sediment could suddenly be forced out, sideways, through the slope face, creating undersea cracks, vents and landslides.
But Flemings and Dugan stress that, despite their research, there is still not nearly enough evidence to say for sure that this will cause a tidal wave. And they haven’t done any calculations to predict if and when the high-pressure water zones could collapse.

“Our contribution here is to recognize high fluid pressures in offshore New Jersey and present a quantitative model that describes how these fluid pressures could contribute to slope instability and fluid expulsion,” Flemings says. “We have not tried to predict the probability of a significant failure but recognize that further research is warranted.”