A plant of great beauty, New York ironweed, Vernonia novaboracensis, fills moist fields and streamsides with its vibrantly colored, violet flowers from mid-Summer to Fall. Its striking appearance and widespread distribution throughout Virginia make it an excellent choice for the Wildflower of the Year.

This plant is most frequently recognized by the common name New York ironweed, but is commonly referred to simply as ironweed. The specific name for the genus, Vernonia, honors an English botanist, William Vernon, who collected plants in Maryland in the seventeenth century. The plant species name novaboracensis refers to the plant being `of New York’ where it may have been collected first. 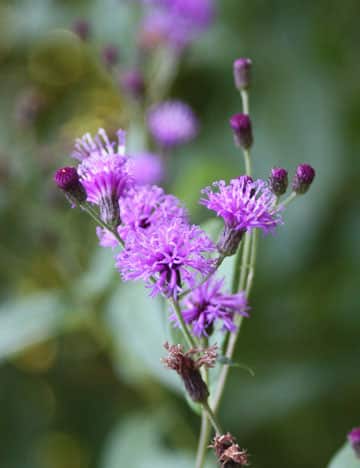 New York ironweed is an herbaceous species in a genus that consists of about 500 – 1000 species of herbs, climbers, shrubs and trees. Species of Vernonia are distributed around the world with representatives found in South and North America, Asia, and Africa. Ironweed is a member of the Composite family, also known as the Asteraceae. Plants in the family can be recognized by their inflorescence, which appear to be a single flower, but in fact are a collection of flowers merged into a single head. Familiar members of this family include sunflowers, daisies, and black-eyed Susans.

New York ironweed grows to three feet in dry soil to nine feet under favorable conditions. Stems can be smooth to rough-pubescent (covered with stiff hairs) and bear lance – shaped to lance – oblong shaped leaves, attached to the stem alternate one to another. Leaves possess fine serrations along their edge and grow three to ten inches long.

The plant’s most striking feature is its richly colored deep purple to rose – purple inflorescence, produced in late July through October. A white flowered form is found rarely. Flower heads are carried in flat – topped clusters on short stalks. `Flat top’ was another common name given to the plant due to this characteristic appearance of groups of inflorescence. Every head or inflorescence measures about 1/2 inch and consists of 20 to 40, tubular purple disk flowers each of which produces nectar attractive to long tongued bees and especially butterflies.

Seeds are small, brown, angled nutlets that mature in three to four weeks, and which measure about 1/8 inch in length. The seeds bear a 1/4 inch appendage, called a pappus that aids the seed in orienting during dispersal. Mature seeds persist on the plant for several weeks, or longer, after frost.

New York ironweed is sometimes confused with other plants. In Fall, a novice botanist might mistake late-blooming ironweed for any one of several species of Fall-flowering asters. Ironwood and asters are readily distinguished if one remembers to look for yellow disk flowers as well as purple ray flowers produced by the asters. Ironweed has no yellow disk flowers and no `ray flowers’ at all; the lack of ray flowers makes it unusual among Composites. An analogous attribute is found in dandelions, also Composites, which produce heads consisting entirely of ray flowers but no disk flowers.

Over much of its geographic range, New York ironweed occurs with other species in the same genius. In Virginia, other ironweeds include Vernonia glauca and V. altissima. Expert botanists may be confounded by the existence of hybrids produced when two species of ironweed co-occur, mate, and produce viable offspring. Hybrids often exhibit characteristics intermediate between those of the two parent species. The problem of identifying a plant to species may be greater in the Midwest where as many as six species are found.

New York ironweed is a striking, beautiful native for the mixed perennial border and is easily cultivated in any rich soil. The vivid violet-purple flowers are especially effective when it is planted with native species with gold flowers, such as goldenrod or black-eyed Susans. The plant exhibits best growth in full sun, in moist, slightly acid soil. In a small garden, where a tall plant would be out of scale, ironweed will flower at a lower height if it is cut back to the ground when the plant is about two feet tall. For a variety of heights in flowering individuals, gardeners recommend allowing some plants to reach four feet and cutting them back to two feet or various heights. In the naturalistic garden, the plant will grow to its full height and tends to stand upright due to its typically strong stems. Many native plant enthusiasts recommend this plant as an elegant substitute for the invasive exotic species, purple loosestrife, Lythrum salicaria.

New York ironweed can be propagated through seed germination, division of mature plants, or by cuttings taken in June or July. Many authors report that seed germination rate can frequently be low, and recommend collection of many seeds to insure that one has enough viable seeds for sowing. These same authors state that dried seeds should be stored in a sealed container in the refrigerator, should be sown thickly, and can be germinated either indoors during winter or, for more rapid growth, outdoors in summer. Recent reports hold that germination success is enhanced if seeds are stored dry for three to six months at 40 degree F.

Humans have traditionally used ironweeds for medical purposes in the form of teas, tinctures, or decorations made from leaves or roots. Teas were used to treat loose teeth, pneumonia, to promote sweating in children, as a remedy for the `bite of serpents,’ and generally for `women’s problems’ including pain after childbirth.

Where to See New York Ironweed

New York ironweed grows abundantly in low-lying, moist meadows or fields and along streamsides throughout Virginia. The Atlas of the Virginia Flora  indicates that New York ironweed is absent from only eight counties. Overall, it is distributed from Massachusetts to Ohio and south to Florida.

To see and learn more about New York ironweed and many other interesting species of plants native to Virginia, contact your local chapter of the VNPS for times and dates of wildflower walks they sponsor. Watch local newspapers for information of contact VNPS at the address below.

Gardeners should be certain that New York ironweed and other native plants purchased for home gardens are nursery propagated, not wild collected. For a list of retail sources of nursery propagated plants and responsibly collected seed, send a self-addressed stamped envelope to the Virginia Native Plant Society(VNPS) P. O. Box 844 Annandale, VA 22003