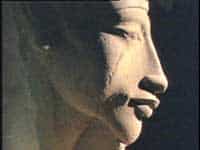 One of history’s most enigmatic characters may be one step closer to being understood, thanks to the research of a fledgling Canadian Egyptologist. Alwyn Burridge, an Egyptology doctoral student at the University of Toronto, has been dogging the mystery of the strange appearance of Akhenaten, the “rebel pharaoh” who was one of history’s first recorded monotheists. Her persuasive theory suggests he suffered from the genetic disease known as Marfan’s syndrome, and not only offers insights into his odd physical characteristics and short lifespan, but into the philosophical and cultural revolution that he visited on the Egyptian society of his day.

The life story of Pharaoh Akhenaten, who reigned from 1356 to 1332 BC, has been shrouded in mystery since the first evidence of him was uncovered little more than 100 years ago. Influential writers, including Sigmund Freud, equated him with legendary figures such as Moses and Oedipus, inspired by his heretical role as the instigator of a wholly new Egyptian religion. Akhenaten, the son of Amenhotep III and born Amenhotep IV, changed his name, built a new capital, and founded a radically new cult. It worshipped the sun as a single monotheistic deity called Aten, and displaced the then-dominant pantheon of gods ruled by Amon, along with the power structure associated with it.

It’s little wonder, then, that after Akhenaten’s mysterious disappearance (his tomb and remains have never been found) the cult of Amon was restored, and every available trace of Akhenaten’s name, rule, monuments and images were destroyed and defaced. His young son Tutankhaten quickly changed his name to Tutankhamen (the well-known King Tut). Akhenaten’s name was even omitted from inscriptions listing the kings of Egypt, hence the ignorance until relatively recently of his very existence.

But enough images of Akhenaten and his family have survived to give us a portrait of an extremely odd-looking individual. Many theories have been put forth to explain his long face and fingers, slit-like eyes, protruding breasts and belly, and wide hips. Some have theorized he was a woman, others a hermaphrodite. He has been posited as history’s first gay personage, due to speculation about an affair with his co-regent Smenkhkare (said by some to have been his famous and beautiful wife Nefertiti in disguise.) One theory suggested the pharaoh had an endocrinal disorder called Froelich’s syndrome, but this seems unlikely as the disease tends to leaves its victims severely retarded, as well as impotent, and Akhenaten appeared to have had many children.

Akhenaten’s rule seems to have led to an artistic revolution in the way that the life of the pharaoh could be portrayed (Akhenaten is often seen in peaceful scenes with his family, in contrast to previous pharaohs), which has led to hypotheses that the pharaoh’s appearance was influenced to portray him as an androgenous demi-god. But there’s little evidence that this had any roots in Egyptian culture, and previous pharaohs were uniformly shown as fit and trim. “The part that really intrigued me was that all the anomalies were consistent in all the depictions,” points out Burridge. “Even those that are really exaggerated, like when Akhenaten looks almost like a praying mantis. The same anomalies are there — nothing more is added, nothing is taken away. And all of these deformities are consistent with Marfan’s syndrome.”

Marfan’s syndrome is a genetic disorder that affects about two people in 100,000 and usually becomes apparent after the age of ten. It affects the connective tissues and has symptoms all over the body, in skeleton, musculature and organs. Eyes are affected and so are hearts – Marfan’s syndrome, if untreated, can significantly shorten lifespan. Unfortunately, Akhenaten appears to have a full expression of the disorder, along with all of the deformities: long-headedness, long face, arching neck, bony shoulders, short rib cage, very wide hips and spidery fingers. Burridge was put onto the track of Marfan’s syndrome when she saw a television program on the disorder – she was struck by the resemblance of Akhenaten to the sufferers shown on TV.

Burridge thinks the peculiarities of Marfan’s syndrome might have influenced Akhenaten in philosophical ways, as well as physical. She thinks it’s no accident that he chose the sun as an object of worship. “It could go a long ways towards explaining the radical changes he made to religion during his reign. He worshipped the sun, and people with Marfan’s syndrome usually have poor eyesight, and low blood pressure. The warmth of the sun and the brightness would maximize his ability to see. He took the roof off of all of his sun temples — they were completely open.” Marfan’s syndrome sufferers have even suggested that the social ostracism that often accompanies a severe expression of the disorder could serve as a powerful incentive to rebel, especially for one who has been suddenly handed unlimited power. Indeed, Akhenaten only came to the throne after the death of his brother, and appeared to have lived in seclusion before this.

The future may vindicate Burridge’s theory. Marfan’s syndrome is a dominant genetic defect, and it has a fifty- percent likelihood of being passed onto offspring. Portraits of the children of Akhenaten indicate that they may have had the syndrome as well. If genetic testing of the remains of Akhenaten’s family shows evidence of the disease, then one of the most intriguing personalities of Ancient Egypt might become a little better understood.

Little seems to be known of the Pharaohs of this period. Despite how little we know about these rulers, their artifacts are some of the most studied in the world of egyptology. This period ran from 2920 BC to approximately 2650 BC, and covered the 1st and 2nd dynasties. Using the first diagram of our timeline, it is easy to appreciate how far back this ancient civilization began.

The Old Kingdom began as far back as 2650 BC. This period is known as the age of the pyramids. The exhibit that has made its way to Toronto from New York and Paris profiles art from these early Egyptian centuries.

The Old Kingdom essentially covers the three dynasties, the 3rd until the 6th – a total of about 500 years. About 24 Pharaohs reigned during this period. The more notable of those in order of appearance are: Djoser, Khufu, Khafre, Teti, Pepy, and Montuhotep.

While this kingdom was relatively short lived, foreign trade developed substantially, as did large building projects. In total, this Middle Kingdom enjoyed new prosperity for a few hundred years, then it appears as though internal problems began to surface and trouble arose.

The Middle Kingdom covered the latter end of the 11th dynasty and all of the 12th.

This period covered the 13th to the end of the 17th dynasties.

Due to the economic prosperity of the previous period, the Egyptian civilization was under a greater threat of invasion from neighbouring civilizations – in particular the Hyksos. The Hyksos were thought to be a nomadic and semitic people likely from Syria and Palestine. Hyksos, their ruler, muscled in and founded the 15th dynasty. But many Egyptian while remaining loyal to Hyksos in an arrangement referred to as parallel dynasties.

In about 230 years, it appears as though up to 90 different Egyptian leaders, under the control of Hyksos, ruled the Nile. Despite Hyksos’ presence, it was thought that this period was relatively peaceful and prosperous and that the Hyksos people respected the religion, and the culture survived well.

The end of this period was marked by the Egyptian uprising of the 18th dynasty, the main agitator was the Pharaoh Ahmose. He dissolved an alliance that Hyksos had created with Nubia, and Egypt came back under Egyptian rule. This brought on the birth of the New Kingdom.

This kingdom marked a rejuvenation of the Egyptian culture. Once again art and buildings moved to the forefront. It is believed that near the end of the 19th dynasty the priesthood started to squeeze out the central government. Tomb robbing was at epidemic proportions during the 20th dynasty. At the end of this kingdom, the priesthood became an inherited route to access the power to rule and the established government broke down.

The 18th dynasty marked the beginning of the New Kingdom – it began with the rule of Ahmose who overthrew the Hyksos occupation. The New Kingdom lasted until the end of the 20th dynasty, spanning close to 500 years. Pharaohs like Rameses I, II and III, Queen Hatshepsut, the famous King Tut and the Thutmose Pharaohs all presided during the New Kingdom.

This period lasted for a mere few hundred years (the 21st to the 24th dynasty) and there is little known about it, other than the capital of the Egyptian civilization moved around from one city to another. It went through an apparent six or seven relocations until the end of the period when it was settled in Thebes.

Ranging from the 25th to the 31st dynasties, there appears to have been a variety of attacks on the culture from the Assyrians and the Greeks. After these conflicts settled down, there was another renaissance in the arts where they remained true to the adage ‘everything old is new again’. There was a rebirth of the Old Kingdom style in art. In total this period spanned approximately 400 years.

The infamous Alexander the Great moved in to rule the Egyptian civilization in 332 BC. At the end of his rule in 323 BC, who ruled when becomes more confused. There were a number of co-regencies or what is also known as simultaneous rule. This period is also known as the Ptolemaic period, as the family of Ptolemy seems to have occupied a fair amount of office space. This was also the time of Cleopatra.

Egypt remained powerful and wealthy until the death of Cleopatra – after she died, Egypt was ruled by Rome. Cleopatra died in 30 BC at the age of 39. It is believed she committed suicide by an induced snakebite. As Egyptian religion goes, death by snakebite would secure immortality. With this, she achieved her dying wish – not to be forgotten.

This period essentially marked the end of the ancient Egyptian civilization as archeologists and egyptologists have come to understand.