This is the view that awaited Bob Walter and his team of geologists, paleontologists, archeologists and biologists on the afternoon of February 12, 1999. About 50 kilometres inland from the Red Sea, Dandero is made up of badlands – ancient basins that have been uplifted and exposed. Under a blistering sun, the team walked all afternoon, trying to get a grasp of this unexplored, unmapped terrain. Following a ridge of brown sandstone, a sedimentary rock that preserves fossils well, they came upon a steep slope.

“So, we climbed up several hundred metres high, and we’re hot, sweaty and panting when we get to the top of the hill. I look on the ground, and it’s littered,” says Walter, a geologist at the University of Toronto, “absolutely littered! with hundreds of these hand axes. I was completely blown away.”

“It looked like a workshop, where the people had moved out yesterday, dropping their stone tools on the ground as they left,” gushes Walter. “The shear number of tools was staggering.”

But the toolmakers hadn’t moved out yesterday; they made the stone tools about a million years ago.”We started to look around and survey the general area, and there were more and more and more of these artefacts. In fact, one side of the hill was a fairly sharp cliff and all the way down the cliff, you could see it was like a cascade, like a waterfall of these hand axes that were being eroded out of the hill, cascading down the side of the cliff.”

The tools are called Acheulean bifaces, which means that both sides of a flat stone have been sharpened. In the shape of a teardrop, they ranged in size from the size of a human hand to the size of a book.

“This is the Swiss Army Knife of the Paleolithic, the hallmark of Homo erectus technology,” says Walter. “We suspect that they were used as tools to butcher meat on the bones of animals.”

Hand axes have been found all over the world, and are usually associated with Homo erectus, the precursor to Homo sapien, modern man. According to the fossil record, they were invented in Africa about a million and a half years ago.

Filling in an evolutionary gap

This unusually rich collection of hand axes will help fill in a gap in our evolutionary family tree. The fossil record becomes spotty between 1.5 million and 100,000 years ago. One reason is that there aren’t a lot of areas in East Africa where sediments of that age are preserved to any detail, says Walter. Another is that for the past 25 years, scientists have been preoccupied with trying to pin down the oldest hominid.

As recently as five years ago, all that scientists really knew about our earliest ancestors was when they first appeared. Molecular biologists measured DNA differences between humans and chimpanzees, and then averaged the rate of genetic change over time. By calculating backward, they determined that great apes and our two-legged walking ancestors branched from a common ancestor between six and four million years ago. Such a large collection of million-year-old stone tools will help fine tune the story of how Homo erectus evolved into a form we would recognize as human. But why were so many – thousands – of hand axes in one place? And how can we be sure they’re stone tools, rather than plain old rocks, shaped into their forms by geological processes?

Michael Chazan is an archeologist at the University of Toronto. He’s also a member of the Eritrean Research Project, an international collaboration among Eritrean, Canadian, American, Dutch and French scientists formed to study the relics found in Eritrea. Chazan says it’s the scarring left by the flakes broken off a rock that tells archeologists like him that the stones are indeed tools.

“A hand axe is basically taking a massive rock and shaping it into the shape you desire – with a point at one end, and heavier at the base. Getting that form is somewhat complicated. It involves many, many steps. And the kinds of things I look for are how a given group in a given place went about that project,” explains Chazan.

“If it’s done in the same way over and over again, it suggests that people were learning a type of habit of how to make hand axes. Usually, we find that, in fact, there are such rules of behaviour in making hand axes, rules that guide the project that sees a rock going to a hand axe, and they’re very specific to a given group.”

By analyzing the scars on the hand axes, scientists can get an understanding of how the tools were made, in addition to the knowledge that they are indeed stone tools.

It will also take detailed analyses of the area to figure out why so many stone tools were in one place. But one possibility is that the area was used repeatedly for chopping and butchering meat, perhaps because it was a good place to hunt or scavenge meat. In addition to the hand axes, Walter and his team found hundreds of animal fossils at the site: pigs, elephants, crocodiles, turtles, horses and antelope.

“What makes Hand Axe Hill so important is that nowhere else have so many one-million-year- old fossils and stone tools have been found together,” says Walter.

The team hasn’t yet found the fossil remains of the toolmakers themselves in Eritrea, but Walter emphasizes the yet. “The hominids are the needles in the haystack. They weren’t very numerous in comparison to elephants, antelopes, horses and pigs. So when you first go into an area, that’s what you find. You find the stuff that lived in abundance. Eventually, we’re going to track down and find the hominids,” maintains Walter. “No doubt about it… When you find the tools, it’s only a matter of time before the toolmakers are uncovered.”

How to make a hand axe 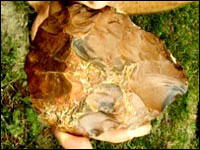 Making hand axes is not as easy as you might assume. Dr. Michael Chazan, an archeologist at the University of Toronto, is part of the international team of scientists assembled to put the discovery of stone tools in Eritrea into context. He says making hand axes takes some serious brain power – knowledge of geometry and geology – and a pair of skillful hands.

1. Choose the raw material.
You need to pick out a rock that can be broken in a controlled manner, usually either flint or a volcanic rock. (The toolmakers in Dandero had a penchant for a black, shaly marble, streaked with white quartz). These kinds of rocks have very small crystals that are evenly distributed, so that when they’re hit, they break cleanly and easily. “It’s best if you choose a rock that already looks like a hand axe,” advises Chazan.

2. Find the right tools.
There are two kinds of tools used to break the original rock into a hand axe. First, you need what’s called a ‘hard hammer’, which is simply a hard rock that won’t break when you use it. A rounded cobble will do nicely. Second, a ‘soft hammer’ – usually an antler or a hard wood – can be used to fine tune the breaks made with the hard hammer.

3. Make a mental image of the rock shaping into a stone tool.
You need a model in your mind of the shape of the rock and how you’re going to turn that into its finished form. And that takes geometry. Like a game of billiards, it’s all about angles. Shaping a rock into a hand axe requires figuring out where and at what angle to flake off the pieces, every step of the way. Says Chazan, if you don’t have a picture of the entire game at the beginning, you won’t win.

4. Shape your hand axe.
Following your mental image, chip away at the original rock until you get the shape of a teardrop, with both sides chipped to make a sharp edge. Presto! An acheulean hand axe.