Not all scientists agree, but some studies indicate global warming is changing the intensity of hurricanes.

Kevin Trenberth is one whose research indicates this connection. Trenberth is head of the Climate Analysis Section at the National Center for Atmospheric Research. Earth’s air and oceans both are warming, and, Trenberth said, for every 1 degree Fahrenheit increase in sea surface temperature, there’s a 4% increase in water vapor in the air.

Kevin Trenberth: And this provides fuel for the storms. Storms reach out and grab the available moisture . . . the moisture in the atmosphere is the critical thing.

So there’s a link between global warming and the higher ocean temperatures measured around the world. This leads to increased moisture in the air and, according to Trenberth, creates stronger hurricanes. Trenberth’s research shows that a one degree rise in sea surface temperature can push hurricanes half a category up in intensity.

Kevin Trenberth: . . .we talk about hurricanes in terms of category 1, the weakest storms . . .to category 5. And we’ve had 3 category five storms this year, which is unprecedented in the the Atlantic. And so we’re talking about maybe half a category increase associated with these kinds of changes. That matters.

When trying to understand the debate about whether global warming is causing more powerful hurricanes, it’s good to pay attention to who is speaking. 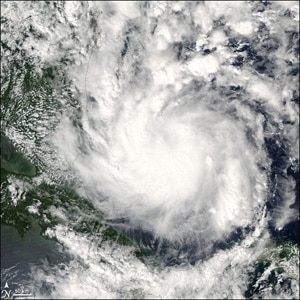 On the one hand, there are mostly climate scientists. They tend to be scientific researchers. They often use measurements (observations) of weather events in the world, combined with computer models that let them manipulate various theoretical possibilities for future climate trends. Kevin Trenberth is a climate scientist. Like most of his colleagues, certainly most of those who have done research in this area, he believes that global warming is causing hurricanes to become more intense. He believes it because his own research, and that of his colleagues, suggests it is so.

Also within the scientific community — on the other side of this debate — there tend to be mostly weather forecasting and data collection experts. Although these scientists might not be manipulating computer models showing future weather possibilities, they are used to looking at long-term trends in weather. So, for example, Max Mayfield at the National Hurricane Center testified before Congress last fall that the powerful hurricanes of the 2005 hurricane season were part of a cycle of increased hurricane activity that parallels an increase that started in the 1940s and ended in the 1960s. He and others disagree that global warming is already having an effect on the intensity of hurricanes.

Who is right? Only time will tell.