In the first part of this article, we had an opportunity to discover, or re-discover, some amazing vegetables. Saving the sweeter goods for last, get ready to enjoy a journey into the exotic world of some lesser known exotic fruit.

If you prefer bold flavors and the occasional foray into strange and unfamiliar territory, these exotic fruit will definitely be for you! My apologies to anyone who is already familiar with these exotic fruit and does not consider them out of the ordinary.

I am still considering anything beyond the grapefruit-apple-orange-banana zone to be expanding my exotic fruit horizons. In this conclusion of the two-part series, we examine the atemoya, cactus pear, Feijoa, white sapote, and the ugly fruit. 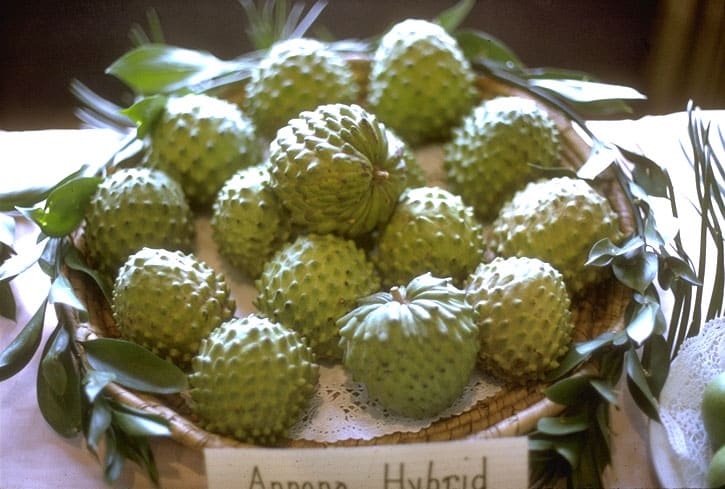 The atemoya (Annona Hybrid) is a cross between the Cherimoya (Annona cherimola) and the Sugar Apple or Sweetsop (Annona squamosa), and resembles the artichoke in size and shape, albeit a distorted, melted one.

Presently cultivated in Florida, this pudding-like exotic fruit is tough-skinned, grayish-green and indigenous to the tropical Americas and West Indies. Apparently “invented” by P.J. Wester, an employee of the United States Department of Agriculture, in 1907, this cross exotic fruit had already naturally appeared in Australia circa the 1850’s, and in Israel circa 1930.

High in fiber, low in sodium, and an excellent source of vitamin C, the atemoya is a luxurious delicacy with a super sweet, pudding-like texture that can replace whip cream or sour cream as a topping for fancy desserts.

Personally, I enjoy just cutting this exotic fruit in half, and eating the creamy, ivory expanse or rich fruit meat, which tastes astonishingly similar to vanilla custard. Be sure to spit out the seeds as you eat!

Look for atemoyas from August to October, choosing relatively pale, green ones. Let the atemoya ripen at room temperature. Although the skin ripens like a banana, the flesh is not affected.

Due to its strange appearance, the cactus pear (of several Opuntia species) is not particularly popular in North America, but is enjoyed in the Mediterranean, Australia, Asia, South Africa, Central and South America, and North Africa.

This barrel shaped exotic fruit is actually a berry, with a deep ruby or violet interior. Don’t be fooled by the bland, firm casing dotted by hard, black seeds! The flesh is similar to watermelon and quite sweet.

Most of the 300-odd species are native to the Americas, but most originated in northwestern Mexico and southwestern United States. Mexico’s current production is more than double the world’s production of avocados, strawberries and papayas combined.

You can find cactus pear at ethnic markets most seasons. Be sure to choose tender cactus pears with full, deep color.

The cactus pear adds a great splash of color to all beverages when the juice is sieved. Add the juice with some lemon juice to mineral water for a very refreshing summer drink.

The exotic fruit Cactus pear is also great straight, served chilled and cubed. Always peel the tough outer skin and be careful of the occasional invisible cactus hairs that may irritate the throat.

Low in calories and sodium, the cactus pear is rich in fiber, vitamin C and potassium.

Sometimes called custard apple, the exotic fruit cherimoya (Annona cherimola) looks like a very large jade pine cone, and its name comes from the ancient South American, Incan (Quecha) language where it originated. Cultivated for centuries in Central and South America, the cherimoya is now growing in Spain, Chile, New Zealand and Australia.

Due to the cherimoya’s sensitivity to heat or cold extremes, it requires time-consuming and complicated pollinating techniques, and must be harvested by hand because it bruises easily. When ripe and prime, this sweet, low acid, silky smooth fruit has flavors touching on pear, mango, pineapple, papaya and vanilla custard.

Who needs sugar when you have exotic fruit like the cherimoya? The fruit also has fat, shiny-dark seeds like a watermelon, and this makes for fun seed spitting.

Like the avocado, cherimoya is picked hard and left to ripen after harvesting, and ripens further when chilled for a few days. Store at room temperature until the flesh yields to soft pressure under the fingers, and then store, if needed, for 3-4 days in the refrigerator.

Serve cherimoya’s halved with a grapefruit spoon, or quarter and remove the central fiber, peel and cut into thin, lengthwise slices. Cherimoya is wonderful served with berries, figs, and grapes, or blended with a little cinnamon, clove and cardamom, and adds fiber, vitamin C, and niacin to the body.

The feijoa (Feijoa sellowiana) can get confused with the guava fruit (Psidium), and is often mislabeled as such at local markets. Both are members of the Myrtle family, which also includes clove, all-spice and eucalyptus.

The elongated and egg-shaped feijoa (say fay-Ho-a or fay-Jo-a) tastes similar to pineapple, quince and grapes, with a touch of lemon and peppermint.

The medium-soft, creamy-granular flesh surrounds a jellyfish center with minute seeds and is covered by olive to lime-green skin. The texture is similar to pears, grainy and dense.

Originating in South America, feijoa is primarily grown in New Zealand and exported around the world, with small growing regions occurring in California. This exotic fruit gets its name from the once director of the national history museum in Spain, Senor Feijoa.

Many Californians are hoping it will become the next kiwi as far as popularity. Generally, feijoas are in the markets from fall to early winter from the Californian crop, and spring to early summer from New Zealand.

Eat when the fruit is as tender as a plum of soft pear, or leave in a brown paper bag until ready to eat. If eaten too soon, the feijoa will be very bitter. It is very tasty to puree the ripe feijoa in a blender with some ice and serve as an elegant cocktail, or add the pungent fruit to salads and exotic fruit salads.

Due to its tart nature, the feijoa is mixed well with the sweeter exotic fruits like banana, papaya and mango, and also makes a wonderful exotic fruit jam or chutney. Peel the skin and halve the fruit, scoop out the pulp, and eat raw, or stew with some cinnamon.

If the rind is not bitter, you may blend the whole fruit and use in smoothies. Feijoas are good sources of vitamin C.

To end this conclusion to “Top Five Uncommon Exotic Fruit Waiting For You” I would like to include one of my very favorite exotic fruits, the white sapote (Casimiroa edulis), also known as zapote, sapota, and zapote blanco.

Low in calories, and a good source of vitamin C and fiber, white sapote can be treated like a persimmon – just spoon out the very smooth caramel-vanilla-like custard and eat straight, or scoop out with a melon-ball cutter and freeze for super tasty non-dairy ice cream dessert.

The skin of the white sapote varies from canary yellow to bright green and various shades, generally the size of an orange or small grapefruit.

The apparently coreless fruit, with 2-5 random seeds, is a native of the Mexican and Central American highlands, but has grown in California since the 1800’s. Some complications preventing the white sapote from becoming a large, commercial crop are unpredictable crop outcome, due to innumerable varieties and grafts, too large seeds, too large fruits that fall too early, and ripening that happens too quickly after harvest.

The hard fruits ripen very quickly and are difficult to predict as to when they will be available at specialty markets.

If you enjoy the white sapote, try some other sapotes like the black sapote (which truly has the taste, texture and color of chocolate pudding), mamey sapote, green sapote and yellow sapote. All of these exotic fruits originated in Central America where the ancient word tzapotl means “soft fruit.”

Be specific with what variety of sapote you would like to try as they all have little in common other than the name.

Truth be told, I have yet to meet a exotic fruit that I did not like, no matter how outrageous the name, color, texture or shape, so be bold, and uncover a new favorite today. Make it a habit to reach for variety in your exotic fruits and vegetables, and get to know another part of the world from the foods that you eat. Happy journeys!

The two desserts, Genoise cake and Pan di Spagna are the basis of most of the homemade easy cake recipes, to be filled in various ways or…

The most common thickener is wheat flour, although it is less effective: in fact it requires considerable amounts and makes the sauces to which is…

The fondant can be prepared with success even at home. First, cook the sugarin the faze called “small ball” in this way: wet 1 kg…